Now entering her 21st year at the University of Chicago in 2020, Ruth Kmak has led the Maroons to 10 NCAA Division III postseason appearances while compiling a career record of 422-281-1 (.600 winning percentage).

Kmak earned her 400th career win during the 2018 season - an 8-4 victory against North Park University on April 2.

The 2017 Maroons qualified for the NCAA postseason for the second-straight year. UChicago posted a 26-14 record and three players were named All-Region.

In 2016, UChicago went 27-10 and reached the NCAA Regional final. The 27 wins were the second-most in program history.

Kmak picked up her 300th career victory in 2014 and her squad started the season with a 16-1 record. The Maroons finished with a 25-10 mark that included a trip to the NCAA Tournament.

Kmak capped the 2009 campaign by notching her 200th career victory - a 6-2 decision over Hope College - during the season's final week.

In 2007, the Maroons earned their second NCAA Division III tournament bid in as many years. UChicago finished the season with an overall record of 26-11, matching the winningest campaign in school history.

UChicago received an NCAA postseason bid in 2006 after finishing 19-13 during the regular season. The Maroons went 1-2 in regional play, with a victory over eventual regional champion, Coe.

As interim coach in 1996, Kmak guided the Maroons to the University Athletic Association title with a perfect 6-0 mark. UChicago only participated in the UAA from 1995-97.

Kmak is a graduate of the University of Notre Dame, where she was a four-year letter winner as a shortstop from 1989-92. A three-time All-Midwestern Collegiate Conference first team pick, Kmak concluded her playing career as the all-time assists leader in Notre Dame history. She also set a team record with four stolen bases in a 1990 contest.

In 2014, Kmak was inducted into the Marian Catholic High School Hall of Fame. As a high school athlete, Kmak played on the Marian softball team that won four Girls Catholic Athletic Conference championships from 1985-88. She was also a member of the basketball team that reached the Class AA Sweet 16 in 1988.

Kmak earned a bachelor's degree in English and theology from Notre Dame in 1992. 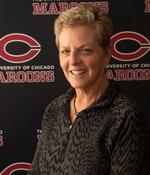 Myra Minuskin enters her first season as a assistant softball coach for UChicago in 2019.

Minuskin arrives in Hyde Park after spending 16 years as the Head Softball Coach at Saint Xavier University in Chicago (2000-16). She also held the title of Assistant Athletic Director. In her tenure leading the Cougars, the softball team won 11 conference titles and made six trips to the NAIA World Series. Saint Xavier finished as the national runner-up in 2016. Minuskin was recognized as the conference coach of the year on seven occasions and as regional coach of the year five times.

Minuskin earned her bachelor's and master's degrees from the University of Illinois. 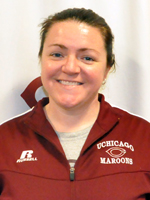 Kelly Ostler enters her 18th season as a assistant softball coach for UChicago in 2020.

In Ostler's time on the coaching staff, the Maroons have a .612 winning percentage (366-232) and have reached the NCAA postseason nine times. As the pitching coach, Ostler helped guide Hannah Roberts to three All-American awards (2003-05). UChicago has also totaled 11 All-Region and five All-UAA pitcher selections since she started coaching in 2003.

A number of Ostler's pitchers rank highly in the school's record books in a number of categories, including:

As a collegiate player, Ostler was a two-time All-American and two-time national statistical champion for the Maroons. Ostler earned All-America honors in 2001 and 2002 and led NCAA Division III in strikeout ratio in 2000 and 2001. En route to posting a 49-16 career pitching record, she helped lead the Maroons to a pair of NCAA tournament appearances. Ostler received the Gertrude Dudley Medal in 2002.

Ostler earned a bachlor's degree in Biology in 2002 and a doctorate in Cancer Biology in 2012 from The University of Chicago.

Alex Chiodo enters her fifth year on the UChicago softball coaching staff in 2020.

In 2017, the Maroons qualified for the NCAA postseason for the second-straight year. UChicago posted a 26-14 record and three players were named All-Region.